New ways to end plastic contamination in the ocean 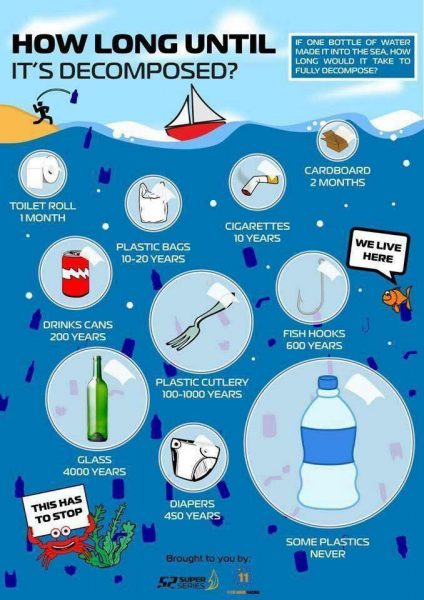 Each day more plastic products are in circulation: shopping bags, plates, bottles, cups and straws accumulate in landfills instead of being incinerated or recycled. Worse yet, due to rain and wind, they end up in the ocean, even if they are disposed of on land. Residue can be left behind after a storm because it wasn’t disposed of properly. They end up in rivers and other waterways even neighborhood sewage systems. Once there, plastic will turn up in the ocean no matter how far their point of origin.

Plastic can also travel from dumpsites via waterways that flow through them. In addition, plastic also finds its way to the oceans from waste of cruise ships, ports, and treatment plants. 80% of waste found in the seas derives from land and the remainder 20% from sea life residue.

Resistant and easy to circulate, plastic can be found in all corners of the planet from the Arctic to the Antarctic. Once it makes its way to the ocean, plastic objects are ingested by marine life, or float around until they make their way into the depths of the ocean to the extent of being trapped in the ice of the Arctic. Plastic has been found in the deepest parts of the ocean as deep as 10,000 meters.

The plastic that is found on the surface is only the tip of the iceberg: it represents less than 15% of all the plastic that is in the sea. Currently, five zones of high plastic accumulation have been identified: one in the Indian Ocean, two in the Atlantic Ocean (north and south), and two in the Pacific Ocean (north and south). A high concentration of microplastics have also been identified in these areas. Plastic has also accumulated along the coastlines especially in regions where there are coastal towns with inadequate waste removal programs, extensive fishing industry, or high levels of tourism. 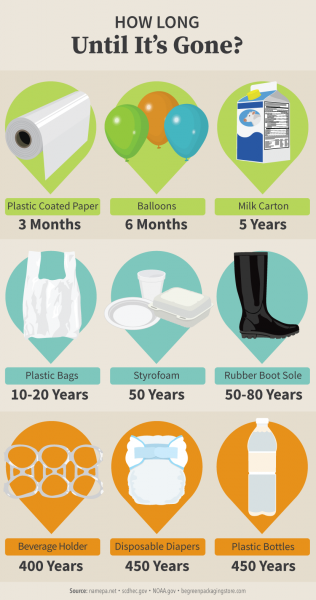 Once plastic objects reach the waters, they take decades to hundreds of years to break down. It depends on the kind of plastic and the environmental conditions such as: sunlight, oxygen, and mechanical agents. In oceans, for instance, UV radiation from sunlight is the principal agent that helps break down plastic. Ocean swell accelerates this process and as a result, larger fragments break down into smaller ones resulting in microplastic. It’s difficult to estimate how long it takes for plastic to break down but it takes much longer than on land. Once it makes it to the water, it gets buried in organic and inorganic material making it less susceptible to sunlight exposure which lowers the temperature and oxygen levels therefore delaying break down.

During the time it takes for plastic objects to disintegrate, they are causing great danger to marine life. Currently, 700 species of organisms are being affected by this kind of pollution.  Each year, over one million birds and more than one hundred-thousand marine mammals are die due to the levels of plastic in the ocean.

Scientists develop a genetically modified enzyme that decomposes plastic in the ocean.

Researchers from five countries joined forces to develop a live organism that feeds on the carbon found in ocean plastic. Plastic makes up almost 70% of all of the waste found in the oceans which puts an endless amount of sea life at risk. But there’s hope– scientists have found that there are microscopic enzymes that “eat” plastic, aiding in the decomposition of plastic waste in the ocean.

In this study, seven scientists from Greece, Switzerland, China, Italy and the United Arab Emirates collected decomposing plastic from two different beaches in Chania, Greece. The plastic material was made of polyethylene, the most common form of plastic found in shopping bags and shampoo bottles as well as styrofoam found in food electronics packaging. The plastic debris had undergone sun exposure and a chemical alteration which made it easier to break down. This process is necessary in order for the enzymes to start “biting” into the plastic.

Genetically modified enzymes “eat” the carbon found in the plastic leaving some hope for a cleaner ocean and a more sustainable world.

The scientific team has researched two samples of enzymes: the first were found living in the ocean and the second were created in a lab but perfected by adding parts from the natural carbon eating enzyme. The latter can survive feeding on only carbon found in plastic. Scientists have analyzed the changes during a five month period.

Both types of plastic lost a significant amount of weight after their exposure to both the natural enzymes and the genetically modified enzymes. The enzymes diminished the weight of the polyethylene by 7% and the polystyrene by 11%. This discovery can offer a new strategy to help fight pollution by releasing marine enzymes to devour plastic waste in the ocean. Researchers are still taking measures to study the efficiency of these enzymes on a global scale.

In the meantime, it is up to us to reduce our consumption of plastic products to have a cleaner and more sustainable planet. The European Parliament has approved new laws and regulations that can reduce the circulation of up to 70% of plastic on European beaches:

Each plastic bottle found on a beach and each time that a fish or bird dies due to our plastic waste is proof of the urgency for these new regulations. Good news is surfacing for the cleaning of seas and oceans.

All our interest in the textile industry is turned to the creation of sustainable products and in the maintaining of our planet. To know more, click here.